There's a Reason "History" has a "Story" in it.

Tags: We can do it, coronavirus, rationing, WWII, Patriotism 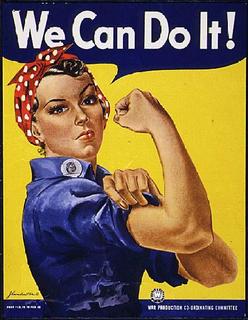 There is no doubt that the coronavirus outbreak – and the unprecedented response from local, state and federal governments – is something that few of us ever thought we would experience in our lives.  However, I recall how much of an impact WWII rationing had on my mother, and my grandmother's, generation.  I remember them saying certain adages when I was little, emphasizing the values that they obviously wanted to impart to me.  Catch phrases like "Make Do, or Do Without" encouraged people of every age in the 1940's to recycle clothing by letting out seams, handing them down to others in the family, or repurposing them altogether.  A new skirt could be made fairly easily by cutting out the top of an old dress; a ripped blouse might turn into a serviceable apron (or, if nothing else, some good rags for the household).  An attitude of "We can do it here, so they can do it over there!" encouraged thousands of Americans to work tirelessly in factories making equipment badly needed for the war effort.

Businesses and production facilities were commandeered by the government to make the items desperately needed by the troops.  Car manufacturers began to produce tanks.  Rubber tires were needed in the war effort.  During WWII, you could not buy new tires for your car – or a new car at all – unless you were a doctor, a clergyman, or some other professional who absolutely needed to be able to get from one place to the other.

Rations were given to every man, woman and child – but you had to think about how you were going to use them, because once they were used up, there were no more until the next distribution.  You could not trade them with anyone.  You could not get more than your share.  When you went to receive your stamps, the people working as distributers looked you over, and wrote your physical description in the ration book: "Mary Jane Doe, age 43, brown hair, slightly grey, 5'4", blue eyes".  If you did not match your description, you could not use your stamps.  If you pulled a stamp out of your book ahead of time, you could not use it.  If 20 ration stamps bought one can of peaches, but 20 ration stamps could also buy ten boxes of Kraft macaroni and cheese, you as a an individual had to figure out just what and how much to dedicate on meal basics or treats, plan, allocate, cut back, and, yes, "Make Do, or Do Without".  If you wanted fresh fruits and vegetables, you might just plant a garden to grow your own produce.  Called "victory gardens", they were a smart (and patriotic) way to supplement the rations (not to mention the quality was superior to what you could buy).  And just because you had enough rations for three rolls of toilet paper did not mean that you were assured of getting toilet paper.  If the store did not have its delivery, you were out of luck.  (Remember those household rags?) Nobody said fighting a war was pretty.

Gripping yourself up by your bootstraps and acting with dignity, maturity and selflessness was considered patriotic. Yes, naysayers called such posters and catch phrases propaganda – but it was really more of an advertising campaign, a necessity for federal, state and local governments to mobilize the voluntary (and in many cases, the mandated) cooperation of as many people in America as they could.  Whether it was a soldier fighting overseas, an old woman standing in line for hours with her ration book in hand, a bevy of twenty-year-old girls going off to work in an aircraft plant, or older men, too old for military service, proudly involved in local service work, the one thing that came out of America during WWII was the feeling that we are all in this together.  Together, we would make a difference.  Together, we stand united.  And together, we would - and did - win the war.

I suppose if you are reading a blog from a historic storyteller, I might already be preaching to the choir, but I think it stands to reason that this coronavirus is going to give American capitalism a real beating.  The government is going to need to commandeer a good number of resources to help counteract and fight this disease to make the country strong again. (If they do not, I would be very surprised.)   And we all have to pitch in – even if that just means dealing maturely with a massive change in your routine.  I can empathize with those of you who are unaccustomed to being at home and are now scratching your head because you don't know what to do with your kids.  Try playing with them.  Or reading to them.  Or looking on-line at your local history and finding out some crazy trivia about your home town.  Your kids will laugh, and you will learn something you've never known before – and that will, perhaps, have the very unexpected result of making you the most interesting person in the office when you get finally back to work.

America has a history of unselfish cooperation.

We did it back then.  We can do it again.